A Convenient Bride for the Soldier
Christine Merrill 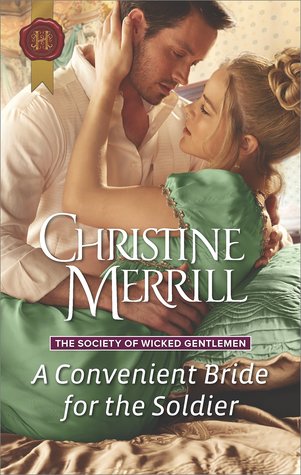 Georgiana is horrified when her father and step-mother give her the ultimatum. She must marry her step-mother's cousin. It's time she wed and they don't see why she's rejecting him. But Georgiana has heard horrible things about him and decides to enter a pleasure house to catch him in the act. Little does she know that he wants her for her dowry just as much as he wants her for other, more horrifying things. But her plans go awry and Captain Challenger rushes to the rescue. The outcome is not what either wanted. But they must make the best of it and move forward.

I love regency fiction so picked this book hoping it was all about romance and intrigue. It was, but there seemed to be missing the usual element from the typical regency romance that I enjoy. That isn't to say it wasn't a fun book, it just didn't really fit my style. The author did a great job of creating tension and angst. But the chemistry between the two was slightly off to me. The majority of the book was focused on their relationship, or lack of it, and Mr. Challenger's business issues. I would have preferred less angst and fighting and more connections. So overall, this was a nice story to read, but it didn't really fit with what I was hoping it would be.

I received a copy of this book from NetGalley. All thoughts expressed are my own.
Posted by Unknown at 3:49 AM

Email ThisBlogThis!Share to TwitterShare to FacebookShare to Pinterest
Labels: NetGalley

I don't know if this is the First Line Friday post? Hopefully I am posting in the right place.
Here is my first line from Magnolia Storms by Janet Ferguson:
“Fear and loss snaked around Magnolia Marovich’s heart like they always did when she studied the satellite images on the three computer screens in front of her. Not again.”