I think of myself as a romantic comedy writer, and I’m hopeful you will laugh out loud many times as you read Blown Together. But like my first novel, Leaving Oxford, I wrote through a serious issue in my life. In that first novel, I wrote about life with an anxiety disorder. Books 2 and 3 of this series followed suit by dealing with their own tough issues while still having a good dose of Southern humor. 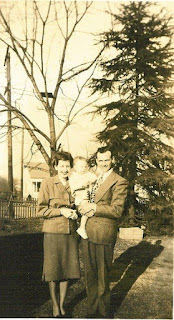 As I began writing Elinor’s story, the Memory Oaks assisted living portion of the story materialized. Elinor volunteered at the home for the elderly. I realized that I was writing through part of my grief of losing my sweet parents. My mother, like Miss Zula in this novel, a resident of the fictional facility, was a brilliant, sweet woman who was ravaged by the nightmare that is Alzheimer’s. My father died only two months after his wife of 60 plus years at the age of 94. He had no short-term memory most of the time like Brother Hammill in the story. But every day after he asked how old he was, he said “the good Lord’s been good to me, letting me live this long.” He also loved singing “How Great Thou Art” and eating cookies any time. Almost all the time. How I miss those great people.

I’m so glad my parents found their place in my love story of Elinor & Sam. If you’ve dealt with Alzheimer’s in your family, I feel for you. My heart breaks for you. It’s brutal. But know that God is there even in those dark times, holding you, carrying you near to his heart.

That said—and wiping a tear now—I hope you enjoy the fun story of Elinor & Sam in Blown Together. I promise I did my best to make you smile.

About the Author:
Janet W. Ferguson grew up in Mississippi and received a degree in Banking and Finance from the University of Mississippi. She has served her church as a children’s minister and a youth volunteer. An avid reader, she worked as a librarian at a large public high school. Janet and her husband have two grown children, one really smart dog, and a few cats that allow them to share the space.

When love storms in…

Wealth manager Sam Conrad is accustomed to his domineering father ordering him around, especially at the bank where they both work. But when his father demands that Sam manage the inheritance of his bossy ex-fiancée, Sam has finally had enough. He leaves in search of a new life, and attorney Big Roy Bosarge from Mobile, Alabama agrees to mentor Sam on his quest for direction. Sam didn’t expect to be thrown together with Big Roy’s eccentric and opinionated daughter.

Storm damage forces lonely romance writer Elinor Bosarge and her hairless cat, Mr. Darcy, out of her Fort Morgan Beach cottage. She plans to take refuge in the boathouse on her parents’ estate, but finds the place already occupied by one of her father’s “projects.” She’s shocked her father would allow another young man onto the property after his last mentee robbed her family and broke her heart. And from the moment she meets Sam Conrad, they disagree about everything from her cat to how to best renovate a local nursing home.
​
Between her mother’s health issues and the hurricane brewing in the Gulf, Elinor feels like her life is being ripped apart. It doesn’t help that she’s falling for the man she’s determined not to trust. Sam finds himself drawn to Elinor, wanting to help her and this new family he’s grown to love. But can he overcome the barrier she’s built to keep him out? When the storm rages and the two of them are blown together, can Elinor find the faith to open her heart again?

Visit all the stops along the tour

Tina, I'm so excited to be your guest! Thank you for hosting me!