For The Record
Regina Jennings 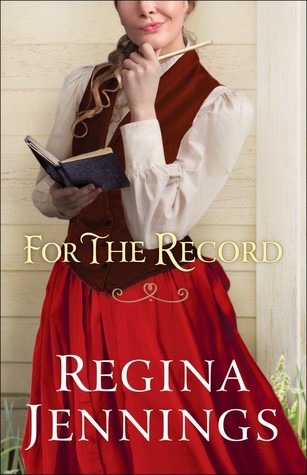 Betsy has big dreams of leaving her small town and becoming an important writer for a newspaper in a big city. Working at her uncle's newspaper should technically help, but no one seems to be taking Betsy's writing seriously. So she comes up with the idea to create a romantic, fiction serial for a newspaper. She based the main character on their new deputy. She'd be horrified if he ever read what she thought of him, but since no one ever reads the big city newspapers she knows she's fine.
Deputy Joel does not want to be in Pine Gap. But he left Texas under some rather uncomfortable circumstances and returning isn't an option at the moment. So he has to put up with the shenanigans of the locals and that nosy journalist Betsy who won't leave him alone.

This story took a while for me to get in to. It wasn't the author's writing, she writes with suspense, drama, and a touch of the romance that draws the reader in. It was the characters. I just couldn't bring myself to like them, mainly Betsy. She was selfish, whiny, and didn't fit with the time period. And her character didn't really grow through the book. I ended it feeling the same way about her. Joel was okay, but a bit too weak for me. The Christian elements, usually stronger in these types of stories felt like an ad-on. Overall, I finished the book because I was writing a review, but was so disappointed in a writer I've enjoyed in the past. Despite my negative comments, I do think readers who enjoy Christian romance, will fall in love with this author, but should perhaps start with one of her other books.

I received a copy of this book from Bethany House. All thoughts expressed are my own.
Posted by Unknown at 1:47 PM